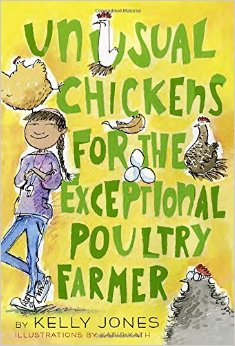 Fans of Polly Horvath or Roald Dahl will love this quirky story of a determined girl, and some extraordinary chickens.

Twelve-year-old Sophie Brown feels like a fish out of water when she and her parents move from Los Angeles to the farm they’ve inherited from a great-uncle. But farm life gets more interesting when a cranky chicken appears and Sophie discovers the hen can move objects with the power of her little chicken brain: jam jars, the latch to her henhouse, the entire henhouse….

And then more of her great-uncle’s unusual chickens come home to roost. Determined, resourceful Sophie learns to care for her flock, earning money for chicken feed, collecting eggs. But when a respected local farmer tries to steal them, Sophie must find a way to keep them (and their superpowers) safe.

Told in letters to Sophie’s abuela, quizzes, a chicken-care correspondence course, to-do lists, and more, Unusual Chickens is a quirky, clucky classic in the making.  ~ Goodreads

I just love this book! Not just because I have 12 chickens (yes, you read that right…12) But also because telling the story through letters was so clever! Oh, uh…whoops! I mean through letters like snail mail/post office. Though, when it first started off as letters, I was a little skeptical, but I got used to it. I just adore how the chickens have superpowers! Sometimes when a middle grade book adds pictures, it makes me feel like I’m reading a book made for younger kids. But the pictures in this book really help pull it together, because imagining a chicken with superpowers is not so easy to do. Another thing was that inside the book were instructions on how to take care of chickens in real life, but they kept that short…so it wouldn’t be boring and it wasn’t really a necessary part of the book.

My complaints: I have nothing to complain about! Why do authors have to be so awesome these days?

“You know that chicken I told you about? It can use the Force.”

“Sorry I thought your farm was boring before. I didn’t know that there were going to be chicken thieves.”

“if people are doing something unfair, it’s part of our job to remind them what’s fair, even if sometimes it still doesn’t turn out the way we want it to.”

I know you’re all so anxious to find out about who is the super awesome guest reviewer! And because we all know that a cat’s judgement would be biased on this book…introducing… 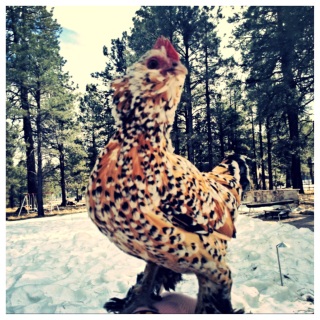 Hey!! Why don’t I have superpowers?

I give this book…