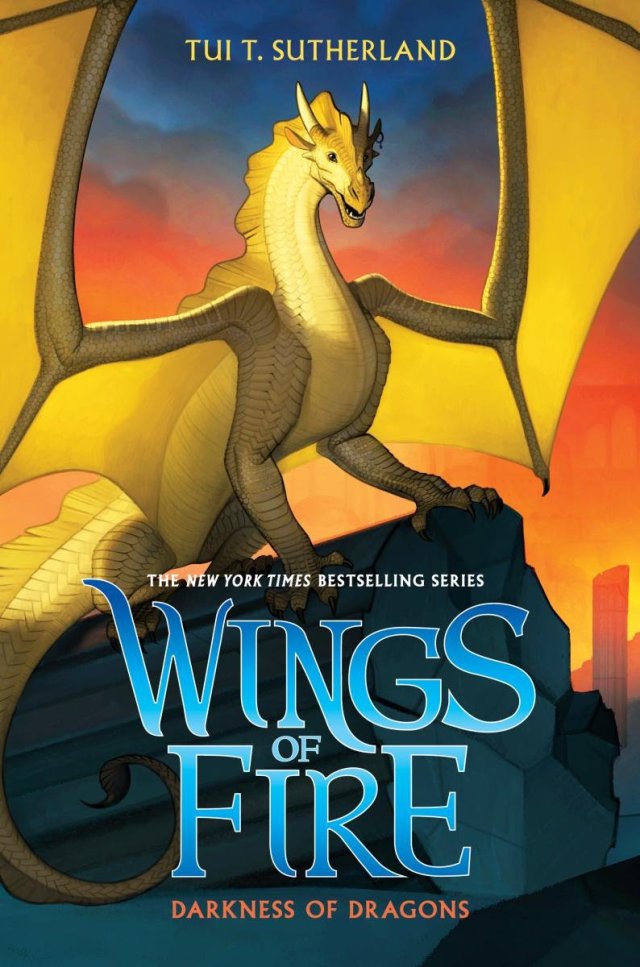 A young NightWing may have had the first true prophecy in generations . . .
Something is coming to shake the earth
Something is coming to scorch the ground
Jade Mountain will fall beneath thunder and ice
Unless the lost city of night can be found.
Will the return of Darkstalker bring a horrible future to Pyrrhia? Or can five young dragons save the world — again?
Don’t miss the thrilling conclusion to the new prophecy in the epic, bestselling Wings of Fire series! ~ Goodreads

(To see my review of the previous book click here)

HOLY FRICTION FRACK FIRST OFF THIS BOOK IS ABSOLUTELY AMAZING AND WORTH BUYING!!!!!!!!!!!!!!! I %100 LOVE EVERY SINGLE THING ABOUT THIS BOOK!!!!!! IT WAS ALMOST AS ENGROSSING AS CARRY ON WHICH IS REALLY HARD TO DO BECAUSE I AM A VERY HARD PERSON TO PLEASE. I WAS LITERALLY SO ANNOYED WHENEVER I HAD TO, SAY, GO TO SCHOOL (who does that? smh) BECAUSE THEN I COULDN’T READ THIS GOSH DARN BOOK. Even though it was almost 400 pages I could have easily finished it in one sitting. It’s been one day since I finished the book and I’m STILL getting  emotional over EVERYTHING about it because: it was from my favorite character’s point of view, I could surprisingly relate in some aspects to his fears and worries, it explored the good and bad and gray areas of the main villain (something most MG books like these tend to ignore and focus more on destroying their opponent) IT WAS FROM MY FAVORITE CHARACTER’S POINT OF VIEW, it was super funny, a d v e n t u r e , and it was from my FAVOriTe character’s POV????????!!!!!!!!!!!

I was so freaking HYPED for this book because I absolutely LOVE Qibli he is one of my favorite characters of all time! At first I was worried that I would be disappointed, but I wasn’t–of course. I love how instead of alternating views throughout the books, each of the main characters have their own books. So you really get to know them and their fears and talents and thoughts. Usually I’m a little hesitant whenever the book switches POV’s. I always end up really liking the character and don’t think that I will like the next one quite as much. Of course, this is never true and I end up loving all of the characters equally.

The only part I was skeptical about is that there’s going to be a sequel? I’ll definitely read it, but I think ending the series with ten books would have been a good ending point.

“See, so it’s actually better to wing it,” said Qibli. “Ha ha, dragon pun, wing it. I’m hilarious.” He did a little flip in the air.

“We should give it an imposing name, too,” he said. “The Inscrutable Bowl of Infinite Stew, or something.”

“You’re right! Stupidest bowl I’ve ever seen! Can I join in? HEY, BOWL, YOUR SHAPE IS INANE! FOOD PROBABLY FALLS OUT OF YOU ALL THE TIME! I BET YOU DON’T EVEN STACK WELL IN CABINETS! YEAH, THAT’S RIGHT, YOU’RE THE WORST! Ooh, this is great. Let’s do it every day! I feel much better.”

6 thoughts on “Darkness of Dragons (MMGM)”