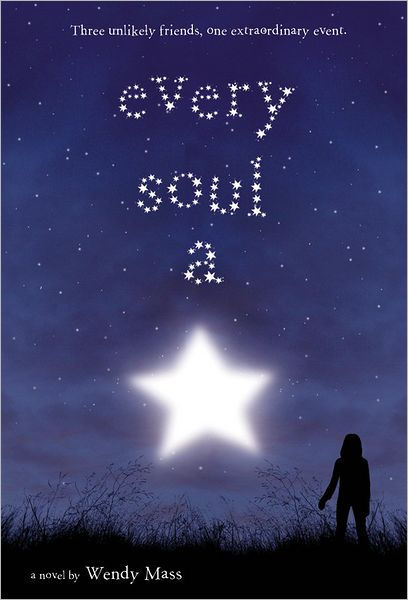 And as streams of light fan out behind the darkened sun like the wings of a butterfly, I realize that I never saw real beauty until now.

At Moon Shadow, an isolated campground, thousands have gathered to catch a glimpse of a rare and extraordinary total eclipse of the sun. It’s also where three lives are about to be changed forever:

Ally likes the simple things in life–labyrinths, star-gazing, and comet-hunting. Her home, the Moon Shadow campground, is a part of who she is, and she refuses to imagine it any other way.

Popular and gorgeous (everybody says so), Bree is a future homecoming queen for sure. Bree wears her beauty like a suit of armor. But what is she trying to hide?

Overweight and awkward, Jack is used to spending a lot of time alone. But when opportunity knocks, he finds himself in situations he never would have imagined and making friends in the most unexpected situations.

Told from three distinct voices and perspectives, Wendy Mass weaves an intricate and compelling story about strangers coming together, unlikely friendships, and finding one’s place in the universe. ~ Goodreads

I’ve heard so much about this book and honestly I wish I’d read it sooner. Its a wonderful book filled with so many emotions and experiences that it just warms your heart.  Its bittersweet and filled with hope. It sorta felt like if someone had taken a short exerpt out of someone’s life, there were so many possibilities and every moment I read felt special. The author could make another book about literally any of the characters in the book and I would immediately read it. That’s how much depth each of the characters had.

I honestly don’t think I can express how real this book felt to me. It wasn’t necessarily the best book I’ve ever read, but it felt like one of the most accurate. The author really understood her characters and 12-13 year olds. I honestly wouldn’t have been surprised if all of these characters turned out to be real. Despite there being three main characters, I don’t think I could pick a favorite (though I definitely could pick a least favorite XD.)

All of the characters are going through a rough time and change in their lives. They learned to accept it and move forward and made such inspiring and incredible friendships….*sigh* I would absolutely LOVE to see this book turn into a movie. It’s one of those books that you really wouldn’t have to change much going from page to screen and the setting is so pretty and- *wink wink @ film company person reading this*

Every Soul a Star is honestly one of the best contemporary MG books I’ve read. One of the things I loved about it was how it involved astronomy. I think it tied in perfectly with the story too. It added more depth and meaning to the characters’ ‘why me?’ journey. I also personally love the stars and thinking about how when you look up at them, you’re actually seeing things that existed thousands of years ago.

The best part of the book was the lead-up to the eclipse. It was something that brought them all together and would signal the end to their time together. They anticipated the eclipse but also dreaded it. They all realized something at the end and it was SOOOOOOOOO good. >_<

I’m not sure if that review was coherent but hopefully you got the message XD.

I am not plain, or average or – God forbid – vanilla. I am peanut butter rocky road with multicolored sprinkles, hot fudge and a cherry on top.

Instead of helping Mario to leap over a bottomless pit, every time I press a button a Madonna song starts playing.

“Oh yes! It’s all very expensive, but so is living in the ‘burbs. My parents had to take out a second mortgage just to pay for all our activities.”

6 thoughts on “Every Soul a Star (MMGM)”