Hello fellow amazing humans! So, this post is a day late. And I blame it ALL on JollytheGeek because he decided to tell me about this amazing anime show which foRCED ME TO BINGE WATCH IT ALL WEEKEND which is the only time I can get a lot of reading in. ThaNKS A LOT JOLLY. XD So I haven’t been able to read a lot this week, so I just decided to review the 3rd book in the Keeper of the Lost Cities series, Everblaze because I’ve read it multiple times. Plus, Lodestar comes out in less than a month! YAS! Anyway, the Whelp, I Am Way Behind announcement is that you might have noticed that the Bookolympics has one more event but it hasn’t been updated yet? Yeah, so about that. Um, I WILL finish it. But it might be a little bit before it is done. I am REALLY sorry and just want to thank everyone who nominated books, you guys are the best!!! *hugs* <333 Anyway, here’s the review! 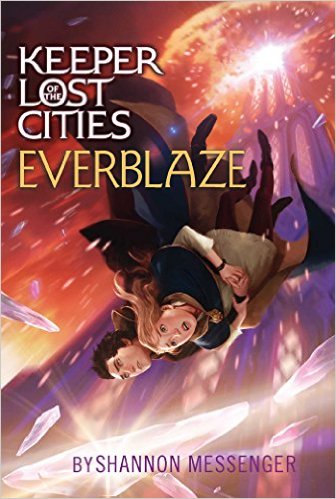 Sophie Foster is ready to fight back.

Her talents are getting stronger, and with the elusive Black Swan group ignoring her calls for help, she’s determined to find her kidnappers—before they come after her again.

But a daring mistake leaves her world teetering on the edge of war, and causes many to fear that she has finally gone too far. And the deeper Sophie searches, the farther the conspiracy stretches, proving that her most dangerous enemy might be closer than she realizes.

In this nail-biting third book in the Keeper of the Lost Cities series, Sophie must fight the flames of rebellion, before they destroy everyone and everything she loves. ~ Goodreads

OOOOH GAAAAAH EEEK AHSA ISOFGERWHKUF SADFLAH. <— Those are the emotions that come (free of charge!) with this book.  The plot twists are very…twisty and unexpected. You know when there was that awesome plot twist at the end of Harry Potter and the Deathly Hallows with Lilly and all those peeps? It was like that, but less extreme. Plus it all makes sense and isn’t just like something that the author throws in because they have an plot hole. It is obvious that Shannon spent a lot of time developing the characters and the plot. The writing is amazing as well! This is a fun book to reread because there are so many hints and ironic things that the characters say that sometimes I just have to laugh at the morbid jokes that are made ;).  But, despite all that awesomeness, the ONE TRUE AWESOMENESS SHINES THROUGH THE REST!!!!!!!!!! And its name is 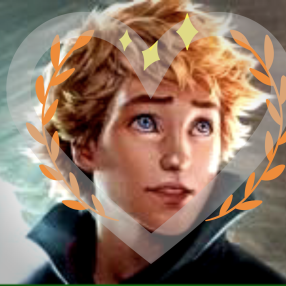 FEAST YOUR EYES!!!! XD But seriously though, he is THE BEST CHARACTER IN THE ENTIRE SERIES. His backstory is SO AWESOME IT MAKES ME WANT TO CRY and he is such and amazing friend to Sophie (plus he HAS A PLAN for all you skeptics) and AAAAAAAAHHH THE FEELS!!!! He really cares even though sometimes it might seem like he doesn’t and he always can cheer people up. Plus he has a connection to Silveny!!!!! AND THE HAIR!!!! AAAAAH!! And then there is Sokeefe, THE GREATEST SHIP EVER!!!!! 😀 It is so cute and honestly, I can’t imagine Sophie with anyone else! Neverseen’s ending does complicate things a tad, but no relationship is perfect, right? Anyway, SOKEEFE 4 EVA!!!!!!!!! :)))))

“Aura of doom?” Keefe asked, a smirk curling his lips. “Sounds like my kind of party.”

No matter how many times the elves explained the “illumination in a darkened world” analogy, she would never stop thinking it was weird to have a school named after glowing fungus.

6 thoughts on “Everblaze (Along with a Whelp, I Am Way Behind announcement) (MMGM)”